The market has rebounded nicely from last week with Bitcoin back at sub-$50k levels and again flirting with the $50k mark. Both ETH and BTC are up over 10% from last week.

Market capitalization is currently sitting at $2.1T, up from 1.9T last week.

All other cryptocurrencies within the top 10 rankings remain the same.

Axie Infinity takes top position almost doubling in price over the last week. I wrote about Axie infinity back in August, as it's become a source of income for many players, as well as the NFT marketplace has become a massive income source for NFT creators.

OMG Networks is up 74% from last week and notable mention goes to ICON and Qtum for their impressive gains.

This is a shortlist of our top picks for emerging projects with excellent growth opportunities and significant price movement over the last month. The projects listed in this section are the smaller capitalization projects that generally fall into one of these three levels: small-cap ($100M-$1B),  micro ($10M-$100M) or nano ($1M-$10M).

Presearch makes our list again this week. Presearch is the next-generation search engine that is truly powered by its community. It is free to use and users are rewarded with PRE tokens for using it. According to the Presearch team, it already has over a million active users and they are working on expanding its userbase in both North America and Europe.

As of early last month (September 1st) Presearch was preinstalled on all EU android phones, which is believed to result in the doubling of the price of the coin over the last 30 days.

Sitting at a market capitalization of just $151 million, this coin has just entered the small market capitalization level. With the current market feedback, rapidly increasing adoption and increased awareness of this project it is anticipated to perform very well over the next few months.

If you missed the boat on the NFT craze, you may want to pay attention to this project. Metahero offers 3D scanning and modeling of real-world objects which can then be converted into NFTs.

Metahero offers the ability to create realistic virtual 3D models — even yourself. As their tag line reads — Be Your Own Hear with MetaHero.

Metahero can be used to create avatars for gaining, social networks or anything you like. There really isn’t any limitation to the use cases for this software.

If the concept of 3D avatars turns into a trend on any of the major social networks, this project has the potential to explode in both use and price.

This project already has massive market adoption and likely will continue as both the technology and adoption of the technology increases in gameplay and NFT creation. This token has the potential to achieve a top 100 ranking within the medium term.

XYO is a project that looks to network devices to anonymously collect and verify geospatial data. XYO caters to industries that need trusted tamper-proof data about a location. In many ways, this project works to simulate real-world location information on the blockchain.

The use case for this technology is immense and can include such industries and facilities as Hospitals, Airports, Insurance and government security initiatives.

As the industry's need for secure geospatial data grows, so will the demand and price for XYO.

Our latest altcoin pick for October has just been published.

Members can get access to the latest Altcoin pick here

We purchased this token on October 1st, and it is already up 57%.

In the last 30 days, this token has increased +200%. Although it is still considered a small-cap crypto, it is highly likely this project will become ranked a top 100 cryptocurrency within the next few weeks and it has the potential to become a top 25 ranking cryptocurrency within the year. The project will likely revolutionize and forever change how individuals interact with the internet - Don't miss out on this one.

If you enjoyed this report and would like to support more in-depth reports and analysis, consider joining our private membership. For the price of a few cups of coffee, you will help support the development of this site and also get exclusive access to our Altcoin pick for the month.

Until next time, trade strong and be legendary, 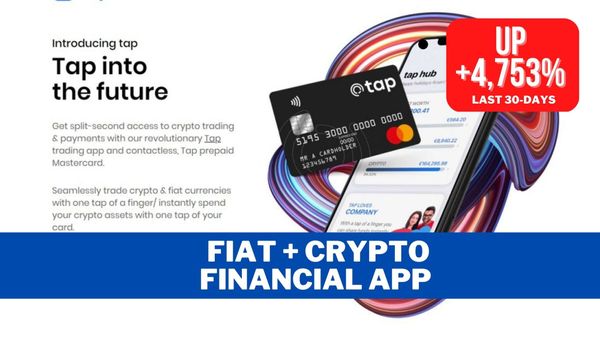